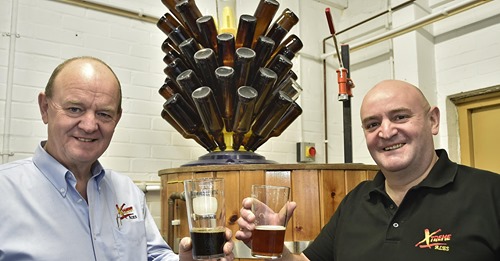 Xtreme Brewery is a family run micro-brewery specialising in ales that has been running for 6-and-a-half years.

At regular capacity the team can brew between 30-40 casks a week (each equivalent to 72 pints) which are sold to pubs, restaurants and hotels across the country.

With much of hospitality having to remain closed due to lockdowns, the team has diversified its business to sell direct to consumers.

Martyn Hunt, one of the partners in Xtreme Brewery, said, “The first lockdown put a halt on our sales, but there was a resurgence over summer, especially with the Eat Out to Help Out scheme. With the second lockdown, things got quieter again and we put a temporary halt on brewing to prevent waste.”

“We’d normally be selling ales in Cambridgeshire, down to Essex and along the south coast to pubs and many beer festivals, but these sales have dried up. Understandably people are supporting local brewers and with different restrictions around the country, many of our retail customers are being much more cautious with their ordering.”

Although the team was left with 56 casks to sell by the second lockdown, thanks to changes in the Licensing Act, pubs were able to provide alcohol as part of the takeaway offer. Through partnerships with local pubs like the Hand & Heart in Millfield and The Ploughman in Werrington, they were able to continue to sell their ales through take away services. This led the Xtreme Brewery team to capitalise on their family ties.

Martyn explains, “As well as being a partner in Xtreme Brewery, my brother is a partner in The Farmers’ pub in Yaxley. It operates more as a carvery and restaurant, and it has an off-licence facility so we began selling Xtreme Ales from The Farmers too. As a sustainable alternative we’ve been putting ale into plastic milk style bottles, and if customers return them clean, we’ll refund their deposit, clean and sterilise them and re-use

“We’re still selling wholesale to retailers, but we’ve also applied for our own Brewery off-licence so we can also sell directly to consumers and the public from our brewery in Alfric Square. We never had this planned but it’s helping us keep the business running while the hospitality industry gets back on its feet. Hopefully we can build an even stronger customer base for the future.