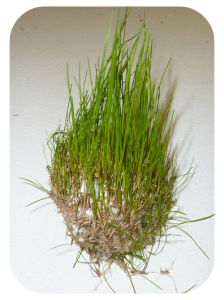 The Lunchtime landscape lectures will see the return of John Newling, the St Johns Square resident artist, speaking on the final stage of the Peterborough Soil project.

Newling will be replacing Steve Bowyer and Alice Kershaw’s talk on heritage and regeneration in the city and will discuss texts and images that have both informed and been informed by his work in the city.

In the first stages of the project, Newling called for the people of Peterborough to contribute images accompanied by a short text, of places in the city that hold special memories for them. Phase two saw the images and texts published in the Peterborough Soil newspaper, which was distributed across the city and then shredded and converted into soil in phase three of the project.
(Grass growing from the shredded newspaper)

In this major talk John Newling will expand upon his belief that on the common ground of ecological sustainability, art can both enrich and nurture a new belief in the social value of civic authority, based on our shared responsibilities as gardeners of the public domain.

The talk will also mark the project’s final phase, ‘Redistribution’, which will see the soil planted into the grass platforms of St John’s Square, Newling said:

‘Redistribution will see the soil becoming a permanent nourishing element of the grass area in the square, containing the images and texts of Peterborough submitted by the people of Peterborough.’  He added: ‘In this sense, it’s an intelligent soil enriched with the beliefs, values and memories of Peterborough.’

The talk will be held in St John’s church at 1pm on 16th November, for more information on the project visit http://www.john-newling.com/?s=Peterborough+soil or for further details on other lectures in the landscape series visit the events page.