Opening ceremony to mark the start of works at Gateway Peterborough

A ceremony to mark the start of works at Gateway Peterborough took place yesterday afternoon.   Gateway Peterborough, also known as The Great Haddon Employment Zone, will become a 240 acre distribution and manufacturing park creating up to 8,000 jobs.

The opening ceremony coincided with the first phase of construction which will include a dual carriageway access road in to, and through, the Gateway Peterborough site.  Access for the new road will be gained from junction 1 of the Fletton Parkway, where it meets the Orton Parkway.

The access road was named Forli Strada last year to mark Peterborough’s 20th anniversary of being twinned with the Italian seaport.

The site is part of the city’s Core Strategy which sets out how Peterborough intends to grow as a city.  Gateway Peterborough is owned and managed by Roxhill Developments and once fully occupied will create 8,000 jobs.

Charles Blake, Development Director at Roxhill Developments, said the site is extremely well located; “The reason why Roxhill is so committed to Peterborough, is that we’re impressed with its ambition to grow as a city.  Peterborough is very well located for a distribution park as it has transport links that are second-to-none.  Work is now starting on the infrastructure of the site and we hope to bring news of potential occupiers in the near future.” 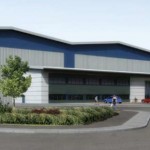 Roxhill Developments is able to offer buildings from 95,000 sq ft up to 1.3 million sq ft at Gateway Peterborough which is located adjacent to junction 17 of the A1 (M).

The opening ceremony was attended by a number of councillors and members of the surrounding area’s business community.