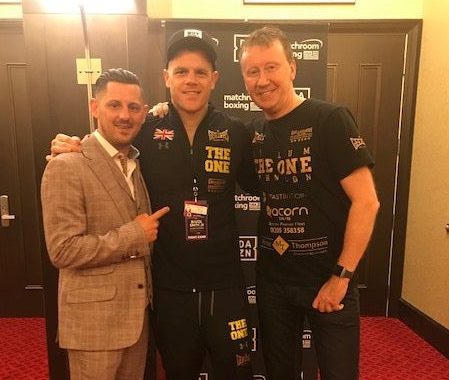 Long-time supporters of Callum ‘The One’ Johnson, accountancy firm Moore Thompson, is celebrating after the Boston-born fighter boxed his way to victory against Sean Monaghan.

Having beaten his latest opponent at the Turning Stone Resort and Casino in Verona, New York, Callum is now once again in contention for a new world title shot.

During the contest, Johnson came out of his corner landing a number of devastating hits in the first two rounds, before taking Monaghan on in his own corner where he scored blow after blow until referee Charlie Fitch stopped the fight and declared Callum the winner.

Throughout the fight, Moore Thompson’s Managing Partner, Mark Hildred, supported Callum on from the ringside having flown out to see the fight in person.

Speaking after the fight, Mark said: “It was a very impressive performance from Callum and the boxing world is definitely taking notice of him now. He worked very hard for this fight and his conditioning and training was superb.”

“Having sponsored Callum for so long as a firm it was fantastic to see him doing what he does best and coming away with the win, which now puts him in contention for a world title.”