Italian food will always have a pizza of our hearts, claims poll

Home » Italian food will always have a pizza of our hearts, claims poll 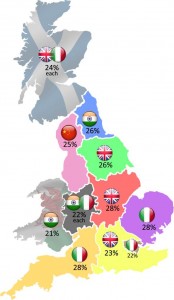 Italian food tops the menu for British diners according to new research on the nation’s culinary preferences. The YouGov poll –commissioned by not-for-profit company, Opportunity Peterborough, which is aiming to make Peterborough the UK’s sustainable food capital, found that of all the cuisines now on offer on British high streets, the nation’s favourite food is Italian with nearly a quarter (23%) of all votes, closely followed by traditional British, e.g. fish and chips (21%) and Indian (20%).

But tastes vary across the country – in the East of England, where Peterborough is leading the charge to attract new restaurants and cafes to the area, Italian food is the favourite, whereas in the North East and Wales, Indian tops the poll and in the North West, Chinese is the order of the day.

Neil Darwin, Director of Economic Development at Opportunity Peterborough, commented: “This new survey of the nations’ tastes shows that Brits are spoilt for choice when it comes to dining out. While it’s great to see traditional British food like ‘Fish n Chips’ coming top in areas such as the East Midlands and Yorkshire, it’s equally good to see how much the British have embraced the national cuisine of other countries.

“Here in Peterborough, we’re pleased to see the area is embracing Italian cuisine. Research shows  that the East of England is in one of the top regions in the UK when it comes to spending on eating out. Eateries such as Jimmy Spices, Chiquitos and Chimichanga have all recently opened in the city centre and many more are expected to flock to Peterborough during the rest of 2011”.

The total sample size for the survey was 2,141 adults and fieldwork was undertaken across Great Britain by YouGov between 21st -23rd February 2011. The survey was carried out online and the figures have been weighted and are representative of all GB adults (aged 18+).