Leading lawyers Roythornes made an impact at a major international food exhibition when they had their logo carved into a one-metre block of ice.

The block was part of the Ice Wall at IFE, one of Europe’s largest food sector exhibitions, which took place at the Excel centre in London.

The Ice wall is staged by the British Frozen Food Federation, of which Roythornes is a member.  It stood in the main thoroughfare, so it will have been seen by over 27,000 food industry professionals over the four days of the event.

“It looked very impressive and was being photographed all day.  We incorporated a QR code within our ice block which took visitors to our web site, so we will be able to measure direct traffic from the show.”

Roythornes are one of the leading firms for Food law in the UK and act for a number producers and processors.

“It was a good event for us as it enables us to meet clients and contacts within the sector, including those from abroad who we don’t meet that often in person.” 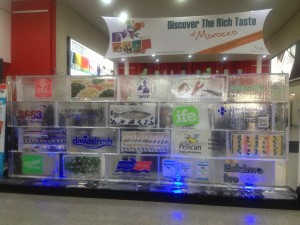 The ice wall at IFE 2013The Roythornes Ice-block