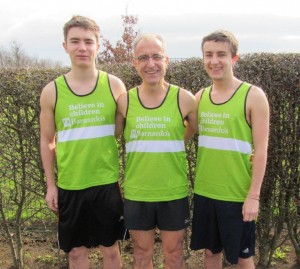 Robert Dillarstone, MD at leading Peterborough and Cambridge law firm, Greenwoods Solicitors LLP, is training hard for this year’s London Marathon alongside his sons, Jake and Barny.  It’s a dream Robert has had since 1993 when he realised that in 2012 he would be 50 years old and his sons would be 20 and 18.  It will be their first marathon.

‘Team Dillarstone’ is hoping to raise in excess of £5,000 for Barnardo’s – the children’s charity which transforms the lives of vulnerable children across the UK through the work of its projects, its campaigning and its research expertise.

All three are training hard as 22 April 2012 gets closer but for Robert, the training is all part of living the dream:  “Although I’ve really wanted to do this for many years, I never thought it would happen for many reasons – I’ve never run a marathon before and didn’t know whether I’d be up to it at the age of 50, my boys

may not have been into sport and fitness and, moreover, getting a place for the London marathon – let alone three places – even with charities can be very difficult.”

“We’re really pleased to be running for Barnardo’s and thank everyone for the great support we’ve received so far. With everyone’s help we know we can exceed our target for this great charity.”

To find out more about Team Dillarstone’s progress and to support Rob, Jake and Barny’s efforts with a donation, go to www.greenwoods.co.uk – you’ll see the details on the front page under latest news.