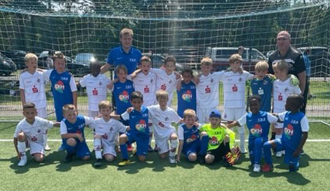 Peterborough based housing association, Cross Keys Homes (CKH) is proud to be kit sponsors of two young football teams as they competed in their first European tournament.

CKH teamed up with Youth Dreams Project (YDP) to sponsor tracksuits, t shirts and match kit for the Under 7s and Under 8s teams from Peterborough who took part in a pan-European football tournament in Cologne, Germany on 4 and 5 June.

The teams looked like true professionals at the airport in their team tracksuits and even more so, when they took to the pitch at the BayArena Stadium, home of Bayer Leverkusen.

The young players enjoyed two days of fast paced games against teams from across Europe, including the youth squads from Juventus and FC Köln. As the only British teams represented, they were also flying the national flag!

CKH Chief Executive, Claire Higgins, said: “Our long-running partnership with YDP has been transforming the lives of young people and giving them new opportunities through sport for many years now. We were delighted to sponsor these kits and help these young people feel like true professionals for this once in a lifetime opportunity. We know experiences like this can really inspire young people and give them the motivation they need to succeed, not only in sport, but in their whole lives.”

YDP founder, Luke Kennedy, added: “Whilst these tournaments are a great opportunity to play some fantastic football, I know from my own experience, they offer so much more. The boys learn so many other skills, like negotiating passport control themselves, taking responsibility for their luggage, teamwork, time keeping and much more besides. Whilst they had the support of our amazing coaches every step of the way, they also got to experience a level of independence that is rare at that age, all in a safe and supportive environment.

“And they did YDP and CKH proud, playing amazing football in hot weather and rain, never complaining, and having the time of their lives!”