Catch C.S. Lewis' The Screwtape Letters on stage at the Key Theatre

Home » Catch C.S. Lewis' The Screwtape Letters on stage at the Key Theatre 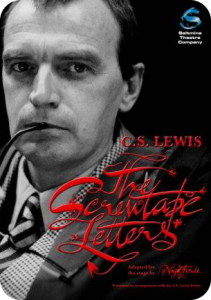 The Saltmine Theatre Company will be performing one of C.S. Lewis’s most popular books—The Screwtape Letters at the Key Theatre on 21st March.

The theatre group’s award-winning production charts the correspondence of Screwtape, a senior devil in hell’s ‘lowerarchy’ with Wormwood his nephew, a junior tempter attempting to secure the damnation of his first ‘patient.’ Screwtape offers the fruits of his experience to his young colleague, using all the tricks that he has gathered over his centuries of tempting.

Nigel Forde’s adaptation of the book can hold claim to being the major source of the play’s achievements. His ability to marry great literature and great theatre is far more difficult than it sounds. Then of course there is Screwtape himself, Saltmine’s Artistic Director David Robinson. For the scores of different characters David has played over his 21 years in the Company, this may well be the one that he is remembered most fondly for. With an effortless, pinpoint precision he delivers a performance that reminds you of the difference between mere skill and true excellence.

Ultimately, the reason for the enduring popularity of both of these stories lie with Lewis himself, who is most famous for penning the seven Narnia tales.