Adam conquers the Straits for Sportsaid

An intrepid Indesit employee battled excruciating pain to become the first British swimmer to complete one of the world’s toughest swims.

National Account Manager Adam Walker stretched his body to its physical limit by conquering Hawaii’s Molokai Straits – despite being stung across the stomach by a Portuguese Man O’War, one of the sea’s most poisonous jellyfish.

The 33-year-old’s near lethal brush with death came towards the end of his mammoth 36-mile swim which took him 17 hours and five minutes to complete.

Vicious ocean currents meant he had to take an alternative route, adding 10 miles to the planned course.

Adam, who works at Indesit’s head office on Morley Way, Peterborough and lives in Nottingham, also braved numerous other jellyfish stings to his face and a six-foot tiger shark swimming underneath him.

He said: “It was just torture. It is the closest I’ve ever been to giving up on a swim, but I just kept thinking keep going while you can still move.”

“After four hours we had covered 10 miles and I was predicted an 11 hour total which would have been a world record.

“After around eight hours it all went wrong. Because of extremely bad currents we could not get in at the traditional finish point.

“I was then stung by the Portuguese Man O’War and I was literally shouting in the water due to the pain.

“I had to pull the tentacle off my stomach and my lower spine was numb due to the poison.

“I was certainly glad to see the finish line, and I’m hoping that people will continue to sponsor me which will make it all worthwhile.”

This swim takes Adam one step closer to completing the Ocean 7 Challenge, to become the first British swimmer to conquer the seven hardest swims in the world. The remaining swims are the Catalina Channel (Santa Catalina to California), the Cook Strait (New Zealand), the Tsugara Channel (islands of Honshu and Hokkaido in Japan) and the North Channel (Ireland to Scotland).

Adam ended by saying: “You can get every dream you want but you’ve got to be dedicated and need to want it.”

White Goods Manufacturer Indesit have sponsored Adam who is raising money for the charity Sportsaid. 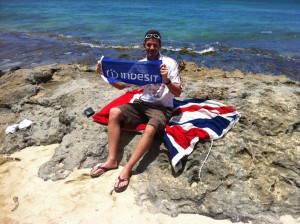 Adam Walker after finishing the marathon swim for Sportsaid