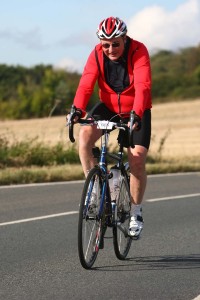 Aged 24, PE teacher Andy Cox was warned he could end up in a wheelchair. Determined to plan for every eventuality, Andy changed career and retrained as an accountant, a job that didn’t rely on physical fitness.

He spent the next 20 years on a range of medication to ease the symptoms of his debilitating and degenerative condition – ankylosing spondylitis, a chronic form of arthritis primarily affecting the spine. Strenuous exercise was out of the question.

Then, two years ago, a new medication was introduced into Andy’s regime. The impact was dramatic and, for the first time in two decades he was able to contemplate engaging in some form of exercise.

“The damage caused by the condition meant swimming and running were out of the question,” explained Andy, a partner at Rawlinsons chartered accountants in Peterborough. “But biking was a possibility.”

Keen to set himself a target, Andy signed up for a 100km charity bike ride, organised by Action Medical Research. His longest ride until then was just 15km. Months of training followed. And, as Andy’s endurance improved, he set himself the target of not only finishing but of completing the entire race on two wheels – no walking up hills!

The 100km took him five gruelling hours but, by the time Andy crossed the finish line, he had well and truly caught the cycling bug.

“The race put me on the path to get out every weekend to explore the local countryside and make the most of the opportunity to exercise for five to six hours at a time,” said Andy, who lives in Peterborough.

It was through talking to other long distance cyclists that Andy learnt about the London to Paris bike ride again organised by Action Medical Research. As Andy explains: “It’s the advancement of medical research that has provided me with the opportunity to participate in this ride so doing something like this, sponsored, feels right.”

Very generously, Andy has covered the cost of participating himself so every penny donated through sponsorship will go straight to the charity. The four day trip, alongside around 300 other cyclists, will finish at the Eiffel Tower in July, at the same time as the culmination of this year’s Tour de France.

“I’ve joined the Cyclist Touring Club and signed up for a number of events around the country to help me build up the miles,” said Andy. “I’m really looking forward to swapping the office for cycling down the Avenue des Champs–Élysées. This is certainly going to be a challenge and one I couldn’t have contemplated even two years ago. Now it feels like I’m just making the most of every opportunity I have.”