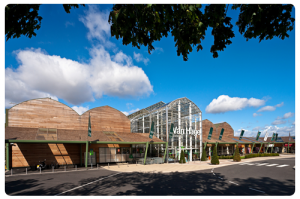 Peterborough Garden Park beat competitors, Manchester Airport Terminal 2 and The Avenue at The Mall Cribbs Causeway, Bristol to scoop the best out of town development title at the recent British Council of Shopping Centres (BCSC) Gold Awards in London.

Chairman of Peterborough Garden Park, Gordon Edington was presented the award by comedian Rory Bremner at the prestigious ceremony held at London’s Grosvenor House Hotel, which was attended by over 1,100 guests.

The centre, which opened in February 2010 has 20 purpose built retail properties and is anchored by a 50,000 sq ft garden centre (with an 80,000 sq ft external sales area) operated by Van Hage.

Commenting on their decision to award Peterborough Garden Park, the judging panel said: “of the strong line-up of contestants, the jury decided this year’s award should go to an innovative scheme, showing an evolution of a traditional concept which the jury felt had long-term relevance to a change of demographic and lifestyle in the UK.”

Gordon said: “Obviously we’re delighted to win such an important award. We knew Peterborough Garden Park was going to be something special when we developed the concept and it’s great that the industry agrees with us and has recognised our hard work in bringing it to fruition.